Measurement and Interpretation of Viscosity for the Process Industries

Measurement and Interpretation of Viscosity for the Process Industries 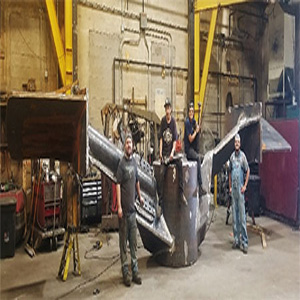 Viscosity is an important quality of many consumer and industrial products. For example, customers judge many personal products, such as shower gel and shampoo, by their “feel” and assess the quality of foods, such as ketchup and mayonnaise, by their texture. Similarly, the performance of paints, in their end use, is determined by their viscosities since this affects how easy they are to apply and how they move after application. The likelihood of a paint dripping down a vertical wall will be determined by its viscosity.

Viscosity can be measured by several devices, most commonly a Couette, cone-and-plate or capillary viscometer. Their basic operating principle is to measure the force required to move the fluid at a certain velocity. The force can be converted to the shear stress being exerted on the fluid, and the velocity can be related to the shear rate. The dynamic viscosity of the fluid is then the ratio of shear stress to shear rate.

The diamond symbols in Figure 1 measure the shear stress versus shear rate, known as a rheogram, for corn syrup measured using a Couette viscometer. The first thing to notice: the relationship between shear stress and shear rate is linear, which means this is a Newtonian fluid. 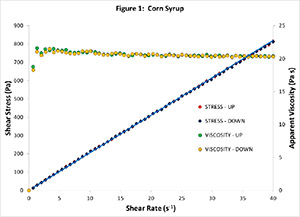 Figure 2 shows a rheogram for mayonnaise. In this case, the shear stress data, the diamonds, curve downwards with increasing shear rate. This indicates the fluid is shear thinning. The viscosity, shown by the circles, decreases with increasing shear rate. At a shear rate of 1 reciprocal second (s-1), the viscosity is 120 Pa s, while at 10 s-1, it is 18 Pa s. So, the questions for engineers: what is the shear rate generated by my equipment, and what is the viscosity that should be used for design calculations? 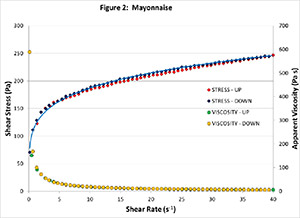 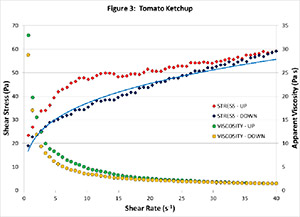 Another potential property of viscous fluids is time dependency. This is demonstrated in Figure 3, which shows the rheogram for tomato ketchup. It is well known that ketchup will not flow out of its bottle until it has been shaken. This is because the fluid builds structure with time in the bottle, and this structure must be broken before it will flow. The shear stress plot shows two curves; the red diamonds show the Couette bob speed increasing, and the blue show when it is decreasing. As the bob accelerates, the structure that has built in the ketchup is broken so that, when it decelerates, the bob is moving in a simple shear-thinning fluid. In this case, engineers should consider whether their equipment will ever stop operating long enough for structure to build, which would require the equipment to restart in a more viscous fluid. If this is possible, how should the equipment be sized accordingly?

​Viscosity is an important quality of many consumer and industrial products

There is a more extreme form of non-Newtonian behavior exhibited by fluids with a yield stress. In these cases, the mixer or pump must generate a minimum force before the fluid will move. This is analogous to the yield stress in a solid material. If a steel bar is stretched or bent, it will return to its original position unless the shear stress exerted exceeds its yield stress. In that case, the bar will permanently deform. 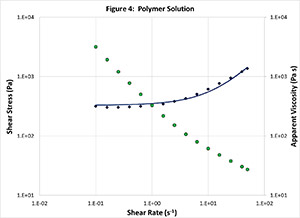 Figure 4 shows the rheogram for a polymer solution. At shear rates below 1 s-1, the shear stress has constant value of ~300 Pa with changing shear and this is the fluid’s yield stress.

An agitator must generate a shear stress that exceeds the fluid yield stress or it will not move. In a stirred vessel this results in stagnation at the walls and fluid surface, which can lead to poor incorporation of materials added to the vessel, poor heat transfer from the vessel walls into the fluid and incomplete mixing of a batch.

One final point to note is that these measurements should be made over the range of shear rates that are expected in the equipment being designed. Typical shear rates in stirred tanks are lower than found in pipe flow, and these are lower than found in a paint spray nozzle. It is quite common for the relationship between shear stress and shear rate to change over a wide range of shear rates and it can be dangerous to extrapolate beyond the range over which the measurements were made.

Unlocking the Value of Connected Cars

Comprehensible Distribution of Training and Information...

The Current Focus is On Comprehensive Solutions

Big Data Analytics and Its Impact on the Supply Chain

Carmax, the Automobile Business with IT at the Core

The CIO's role in rethinking the scope of EPM for...

Transformative Impact On The IT Landscape

Get Ready for an IT Renaissance: Brought to You by Big...

Technology to Leverage and Enable

Speed is the Name of the Game

Policy is a Key Solution to Stopping Packaging Waste

Congestion-Driven Basis Risk, A Challenge for the Development of...

Spring - The New Innovation Company Set up for the Uk Water Industry...

Leveraging the Gig Economy to Augment it Staff in Higher Ed

However, if you would like to share the information in this article, you may use the link below: